How a Psychedelic Band Connects With the World Through Music 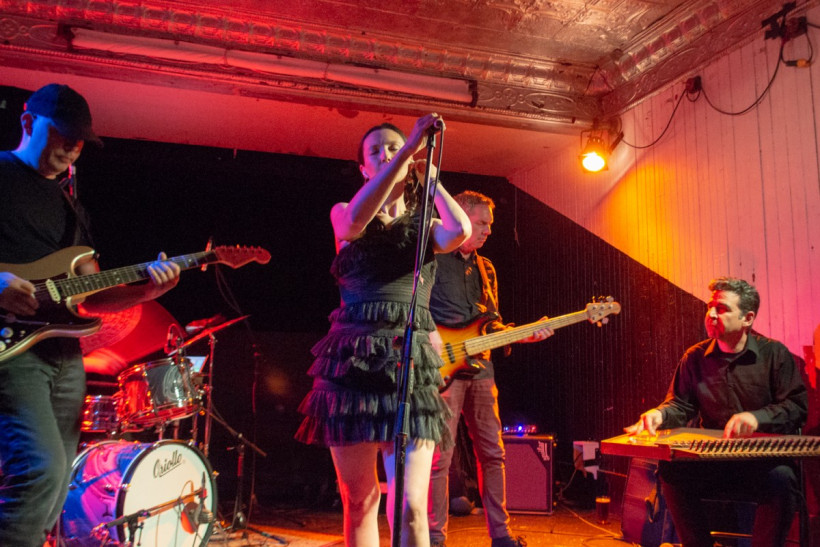 Ozman of Minor Empire is the main vocalist of the band. Photo Caitilin Yardley

Warm lights, burning candles, and a Vikings theme song were the appetizers before leading to the main course of Minor Empire’s Montreal show, on Oct.29.

Walking in Casa Del Popolo’s inside theatre, one is bowled over by the closeness between the stage and the audience. Only a small stage elevated the band from the ground; the artists were a breath away from their fans. And that night, this Toronto-based Turkish band exceeded all expectations.

A vision to the public, Ozman stood on stage in a black dress, her plaited hair falling across her shoulders. She looked around the room and assessed the crowd, a smile playing on the corner of her lips.

“Montreal! Bonsoir!” Ozman shouted, grinning shyly. “That is the extent of my French. Merci!”

As their performance went on, Minor Empire showed their Turkish flair, which was not only lyrical, but musical as well. Folkloric beats that took the audience back to the nomadic lifestyle of the olden days, and words, although not understood by all, that managed to lift one’s spirits up.

This Turkish-Canadian band has been around since 2010. The name came to Ozman in a dream, and with some experimentation with the words Asia Minor (Turkey’s geographical placement on the map) according to her partner and band guitarist Ozan Boz.

“She was playing with the words minor and empire in separate contexts,” Boz said. “The land, the geography is called Asia Minor, and minor chords are very common [in our music]. And for the land… so many empires come and go, but it’s the same culture. We now identify ourselves as Turks but who knows, I could be Roman, Persian. We are just an amalgamation of cultures.”

The band’s heritage plays an important role in their music.

“When you’re in Turkey, the Turkish music is everywhere, right?” Boz said. “You cannot escape it; it’s on TV, you cannot turn it off. So living in Canada, although you love the music here, it’s totally its own, you don’t get to hear those melodies that caught on you while you were growing up. And all of a sudden you realize you start missing it. But not the garbage stuff, the good stuff. You remember that sweet melody your mother sang, it just comes back to you.”

Ozman and Boz’s nostalgia led them to veer towards a more traditional band, with Turkish lyrics, and folkloric beats.

“If [my music] can make them look into themselves and find themselves, that will be the greatest gift of all.”- Ozgu Ozman

Boz said that folk music is not very common in modern-day Turkey, but is an intrinsic aspect of Minor Empire. Their melody and lyrics are Turkish-based, while set in what he believes to be “a new universe, new context, new world, new land. It just takes a new life.”

When asked if the language barrier creates a sort of obstacle to the band when playing their songs, Boz shook his head.

“In my opinion, the lyrics don’t even matter; it’s the melody, the portrayal, the projection, the singers that the band is putting on.”

A recent event at their North Bay, Ontario show, which affected the band quite deeply, can attest to that claim. Following their set, Minor Empire was stopped by an Indigenous woman rushing to thank them.

“She said ‘I heard every pain you felt, every sorrow you felt, I felt it in my soul,’” Boz recounted.

Ultimately, the band aims to invoke changes in their audience’s life. They want them to feel what they felt when music first changed them. 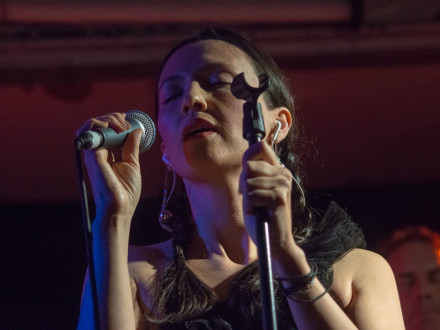 Ozman got the name for their band Minor Empire from a dream. Photo Caitilin Yardley

“I want people to feel what I feel when I listen to an inspiring song,” Ozman said. “Good music makes you search within yourself, and makes you discover yourself, and see yourself in a new light. I would like for my music to do that to anyone who cares to listen. If I can make them look into themselves and find themselves, that will be the greatest gift of all.”

Boz considers performing in both Canada and Turkey to be equally enriching, while having different qualities.

Minor Empire’s newest album is entitled Uprooted, and this feeling is something deeply embedded in the Turkish couple.

“When you’re an immigrant, even if you move all around the world, your home country, the country you originated from, that’s your back up plan,” said Boz. “We don’t feel like we have that anymore.”

“I feel homeless,” Ozman continued. “I have yet to find out where I truly belong. Is it Toronto? Is it somewhere else? I don’t know.”

On stage, however, prefacing one of their songs, she cheekily added: “Little do they know, I carry my home in a satchel with me.”

For more info on the band’s upcoming tour dates, visit their website at http://minorempire.net